I got back into World of Warcraft.

With the impending release of World of Warcraft Classic, I felt that familiar itch for some sweet MMORPG action. Since Classic isn’t even in beta yet, I settled for the current iteration.

My last run at WoW was just after the release of Legion, the previous expansion. It was my first playing since 2010, and I had a blast leveling my druid up to the new level cap and goofing around with a new guild. Eventually, I hit my peak (or at least the best I could do without scheduled and consistent raiding) and my interest waned. My subscription eventually lapsed, my itch fully scratched.

But that need for chasing an experience bar and finding new equipment slowly crept back into my brain.

So I settled for starting up a new character and exploring the gameplay changes with a new class and race since trial accounts are free until level 20. My Worgen warrior, under the name of my old druid character, was supposed to be my outlet for my desperate need for MMO-brand satisfaction. 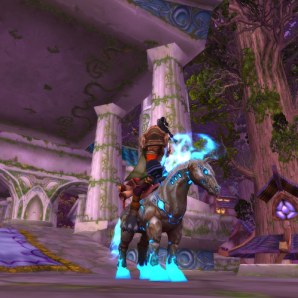 I made it to level 18 before I completely forgot about it. I didn’t feel the need to log back in. The itch hadn’t been scratched or anything—I just didn’t want to keep going. Maybe it was the knowledge that Classic is on the way. Or maybe the WoW subreddit is right and the game’s mechanics are just straight-up unsatisfying now.

(Full disclosure: I logged back in just now to check what level I made it to and ended up making the final push to 20 and got my first mount. Wasn’t exactly a sigh of relief, but it was almost enjoyable.)

Either way, it made me realize how impossible it is truly satisfy that need for what originally got me hooked on the king of MMORPGs. There’s a very unique brand of nostalgia for exploring a vibrant world with other people, for learning new spells and forms, for persevering against tough bosses for the first time.

But there’s also that classic desire for a simpler time where I could focus on the game and learning it with other newbies—learning not just WoW specifically, but the genre itself. That’s not the game anymore, and it never will be. I can’t really put myself back in level 60 gear and figure out how to best DPS as a feral druid on my first big boy raid.

It’s not exactly a satisfying lesson, or even a particularly helpful one—I still have the desire for that warm nostalgia. But at least I can understand how to approach that desire and what state of mind I need to be in when I approach other games.

Unfortunately for my Worgen warrior, I don’t think he’s going to make it to level 120. He’s earned his mount, so I think he’s earned some rest, too.

And I’m still going to keep my eyes glued to that Classic release countdown.